Accessing healthcare in Ukraine after eight months of war: The health system remains resilient, but key health services and medicine are increasingly unaffordable

Accessing healthcare in Ukraine after eight months of war: The health system remains resilient, but key health services and medicine are increasingly unaffordable

Even as Ukraine marks eight months of a brutal war, the health care system in Ukraine continues to function overall, but for growing numbers of civilians spiraling costs, logistical hurdles and damaged infrastructure are making access to essential services all the more challenging.

Those are among the key findings of a recent health needs assessment conducted by the WHO Country Office in Ukraine, shared with the Ukrainian Ministry of Health, international and national health partners, and humanitarian actors on the ground.

The assessment focused on identifying health needs and major barriers to access to primary and specialized care and medicines. The methodology took into account the correlation between income and access to specific categories of medical services and supplies for the 18 and over population of Ukraine.

Some of the specific findings include insights from different geographic areas as well as the health needs of internally displaced persons (IDPs). The survey, conducted in September 2022, is the first such assessment since the start of the Russian invasion into Ukraine on February 24.

“People across Ukraine report that the major barriers to accessing health care are cost, time constraints to get to and from health facilities, as well as limited transport availability,” noted Dr Jarno Habicht, WHO Representative in Ukraine and Head of the Country Office. “Chief among these is the cost of care. Those who are living in temporarily occupied territories and active combat areas remain the most vulnerable, with one in three reporting reduced access to services and medicines, compared to one in five people nationwide.

“At the same time, the findings recognize that as of now the country’s health system remains resilient and overall access to some level of health services is still high. From those who sought care, 95 percent report having had primary care services and up to 90 percent had access to health services for chronic conditions. But upcoming wintertime challenges and the latest escalation in fighting could add to a significant burden on the health system, with thousands of civilians living in damaged homes without fuel or power, potentially vulnerable to a range of dangerous cold weather conditions from frostbite to pneumonia. Another challenge is COVID-19 coupled with seasonal influenza, with a significant percentage of the population still unvaccinated for COVID, a worrying situation at a time when respiratory infections traditionally increase.”

Compounding this scenario are analyses, conducted by the World Bank and UNDP, that the war could push some 60 percent of the population, or even significantly more, below the poverty line. The WHO survey clearly points to mounting economic woes that could further jeopardize the wellbeing of millions.

“The assessment’s results could support the Government and health partners to address critical gaps in designing an appropriate medium- and long-term response plan,” said Dr Habicht. “We will continue to partner closely with the Ukrainian Ministry of Health to find optimal solutions. Even before the war, Ukraine’s health reform process was showing promising results. We must build on that. The commitment to universal health care is real. WHO is here to stay, to support the health system to expand access to health for all, no matter how daunting the challenges may be.”

Details of the Health Needs Assessment

Health needs assessment (HNA) is a systematic method for reviewing health issues facing a population, leading to agreed priorities and policies by healthcare decision-makers and managers in the country.

The survey finds that overall, 1 in 5 people (22%) were not able to get the medicine they needed. In temporarily occupied and active conflict areas, this increases to 1 in 3 people. The situation with internally displaced persons (IDPs) is similar.

The most frequently cited types of medicines that respondents said were difficult to obtain were:

Main reasons for not getting medicine:

Unavailability of medicines at the pharmacy: 46%

Access to care for chronic conditions: 1 in 3 respondents either themselves or a member of their household have chronic disease and more than half of those group (52%) sought healthcare for chronic conditions. The most common being cardiovascular disease (61%), diabetes (25%) and kidney disease (21%). This is a trend WHO continues to see throughout the country. Also, women respondents tend to have higher needs for services and a better chance of getting needed care compared to men.

Next round of the assessment: The second round of the health need survey is planned for December to monitor changes in health needs of the population as winter intensifies across the country.

Current health response: In response to ongoing, urgent needs, WHO continues to bring life-saving medical supplies into the country. More than 1,350 metric tons of supplies have been delivered to Ukraine since 24 February in coordination with the Ministry of Health. And WHO continues to bring in much needed supplies to newly liberated areas as well, including in the Kharkiv and Donetsk regions. Areas including Izium, Lyman, Kharkiv and Sviatohirsk have been reached in the last few weeks with supplies.

Besides tangible medical and humanitarian supplies, WHO is also providing capacity building and technical guidance to meet ongoing health needs. WHO has so far trained more than 11,000 healthcare workers on a range of issues including trauma surgery, mass casualties, chemical exposure, epidemiology, and laboratory diagnostics.

Mobile health units supported by WHO continue to ensure that medical consultations can reach the most vulnerable and those who have returned to liberated areas. Our focus with partners has been to ensure extended primary care and support in managing chronic conditions, such as hypertension and diabetes, in numerous oblasts.

WHO is also contributing to the National Mental Health and Psychosocial Support Programme launched by the First Lady of Ukraine to support the wider population. Almost 10 million people at this time are estimated to be at risk of developing a range of mental health conditions, from severe anxiety and stress to post-traumatic stress disorder and suicidal tendencies. 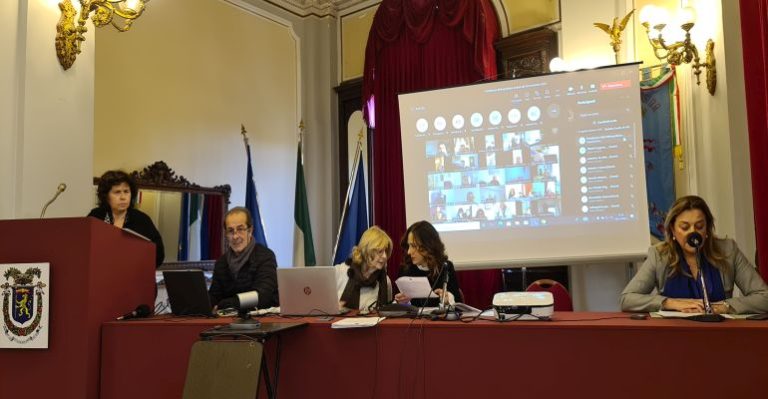